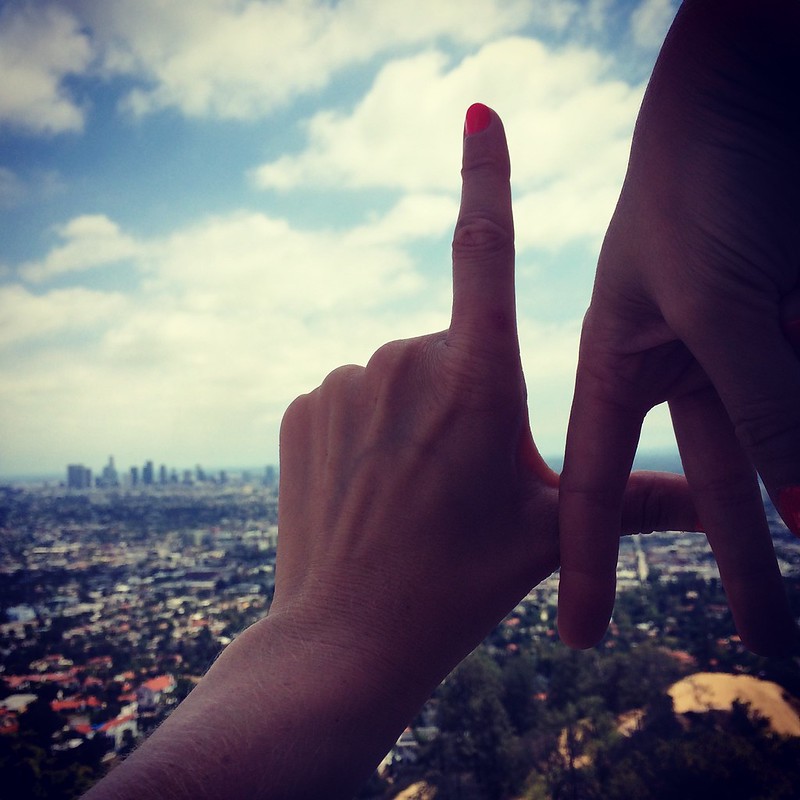 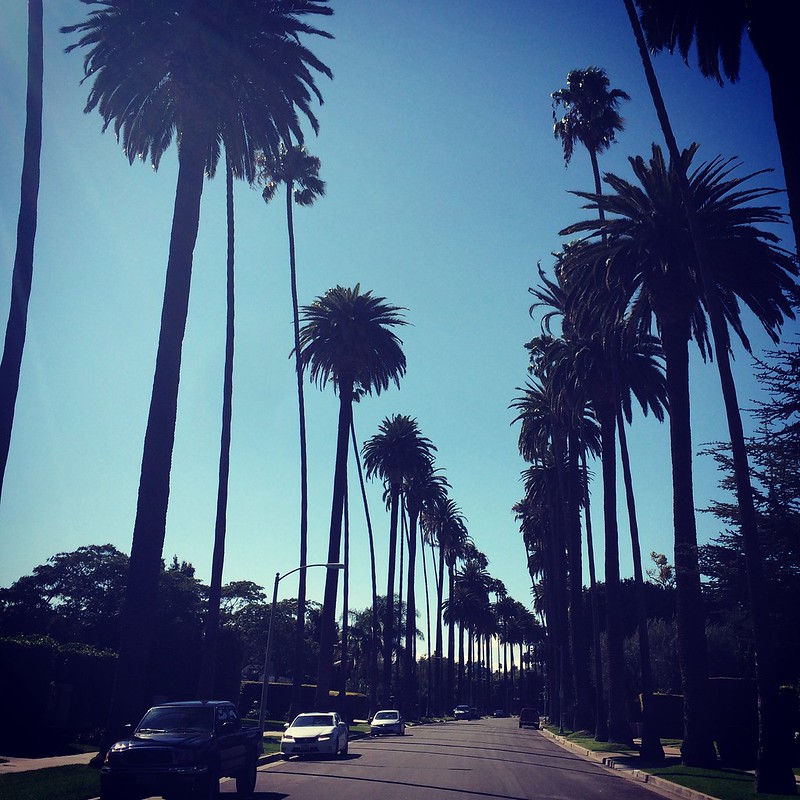 Though I’d never before been, Los Angeles was a key player in my pop culture-laden adolescence. I grew up watching Fast Times At Ridgemont High and Pretty Woman while listening to Sheryl Crow reminisce about “Santa Monica Boulevard” and 2Pac extol his love for California. For a place I’d never been, LA had a big influence on my formative years. To this day, I still sing “It’s Cookie Time” to myself when I bake. 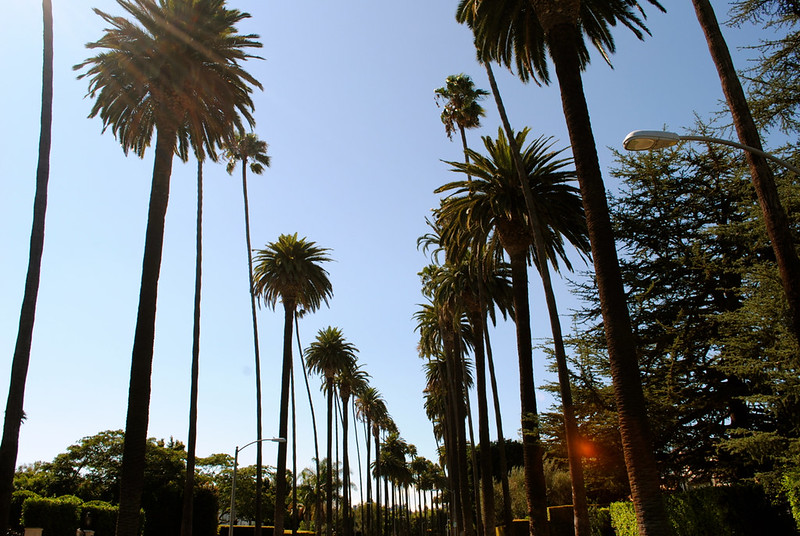 True to form, I’ve created yet another video. Sadly, I didn’t have as much footage to choose from as I’d hoped, but it’s always fun for me to look back on the adventures that we had. And to have visited Hollywood without making my own motion picture seems like all kinds of wrong.

After J and I left Disneyland, we rolled an hour northwest and found ourselves in the heart of Hollywood. I had found a vacation rental cottage just steps from Sunset Boulevard (and right down the street from In ‘N’ Out Burger). I wanted to experience all of the sizzle and scintillation that the City of Angels had to offer, so I turned to the one man who arguably knows the city best. 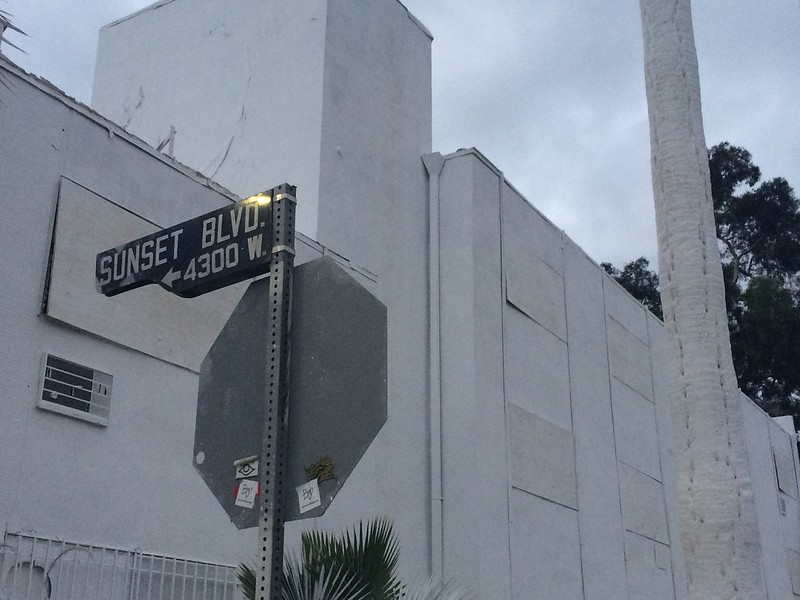 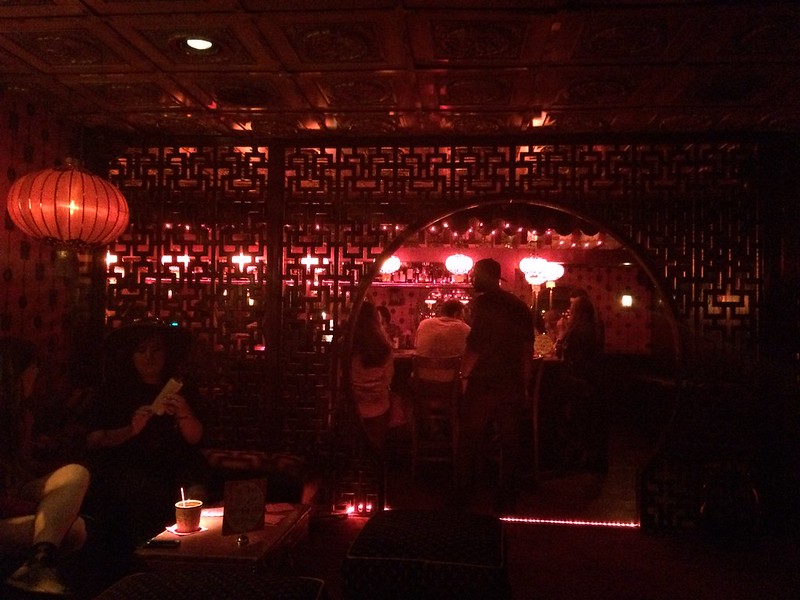 On our first night in LA, Tony was more than happy to give us a personalized guided tour of the city. We visited stops in Hollywood and the adjacent hills, an out-of-the-way park building that was designed by Frank Lloyd Wright, and finally downtown Los Angeles. The man is a wealth of knowledge of LA history, scandals, architecture, and the best spots to nosh on tacos.

Day Two found us down for the count. After four weeks of being on-the-go – plus a late, late evening at the Good Luck Bar in Los Feliz the night before – J and I were exhausted. We fuelled up on pancakes at the IHOP up the street before ascending into the hills to check out the Griffith Observatory. From there we scored killer views of the Los Angeles skyline and the infamous Hollywood sign. 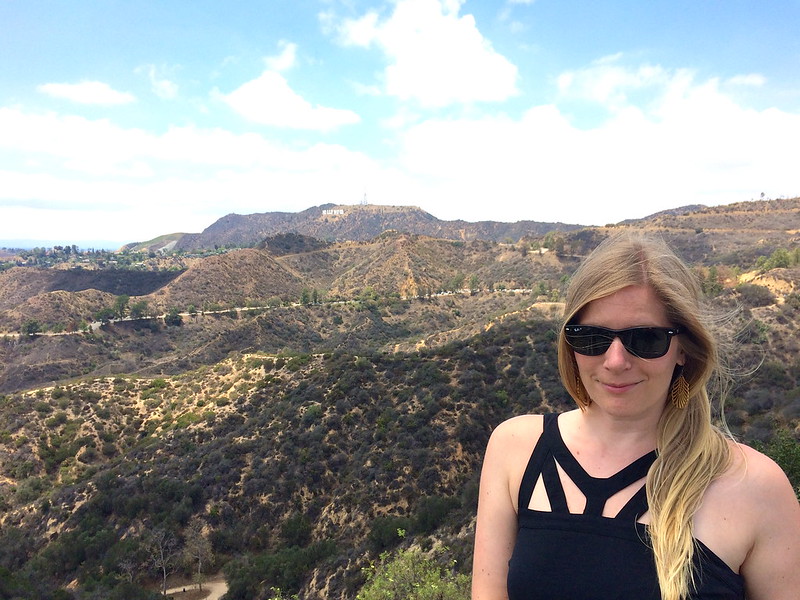 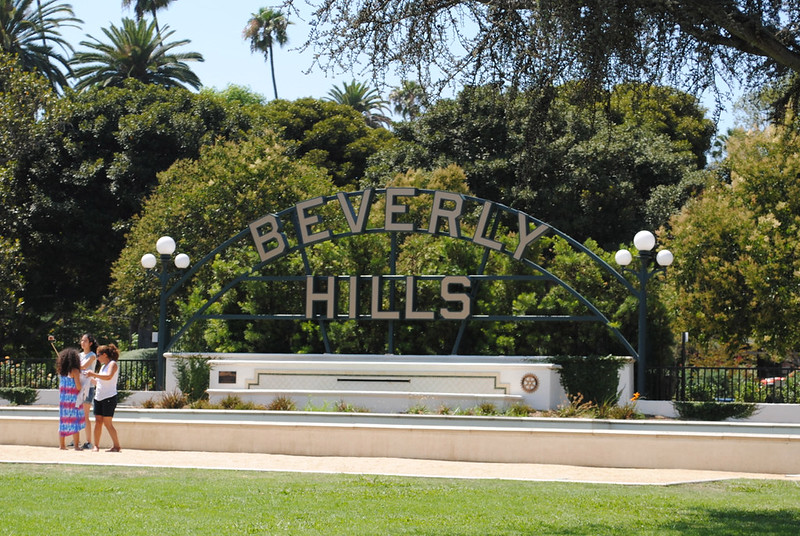 Not wanting to waste valuable time, we soon found ourselves in Beverly Hills. I scooped up a map to the stars’ homes (it’s cliche but someone’s got to do it) and we wove up and down pristine streets with palatial homes. Whether or not the map is accurate is anyone’s guess, but if it is, then we managed to locate the LA abodes of Brad and Angelina, Diane Keaton, Steve Martin and the one and only Jack Nicholson. The day’s true highlight for me was locating Vivian Ward‘s apartment on North Las Palmas Avenue in Hollywood. 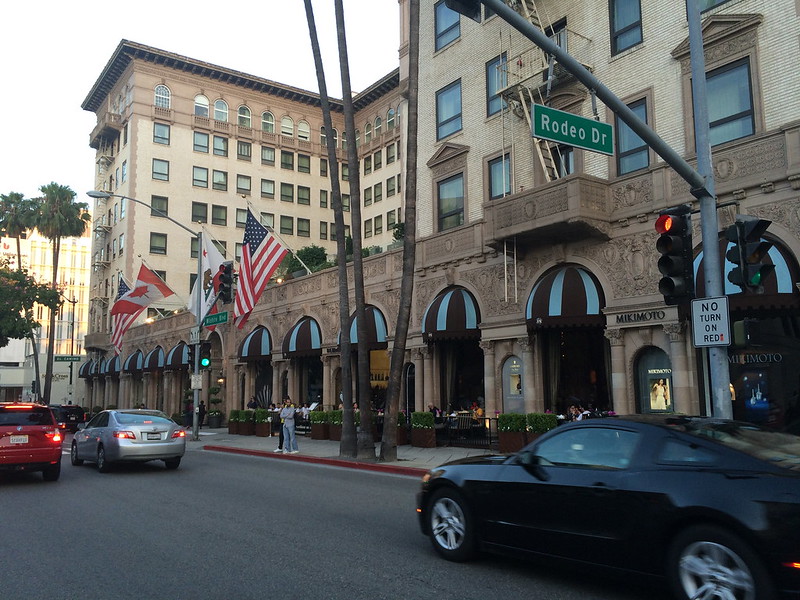 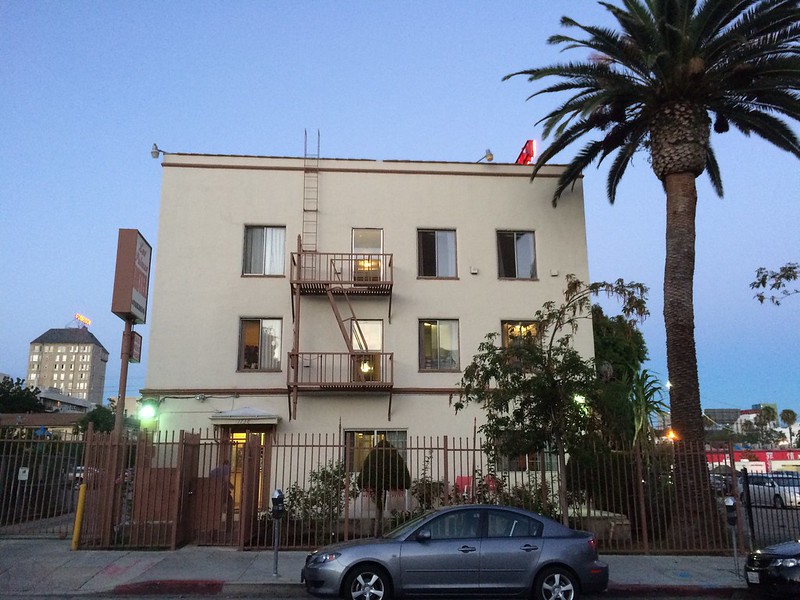 Following a good night’s sleep, we started early in true Los Angeles style by hiking through Runyon Canyon. This hot spot is a favourite of locals and I was fortunate enough to score a bonafide celebrity sighting. Just as we were getting started, Johnny Knoxville walked right past us as he finished his hike. 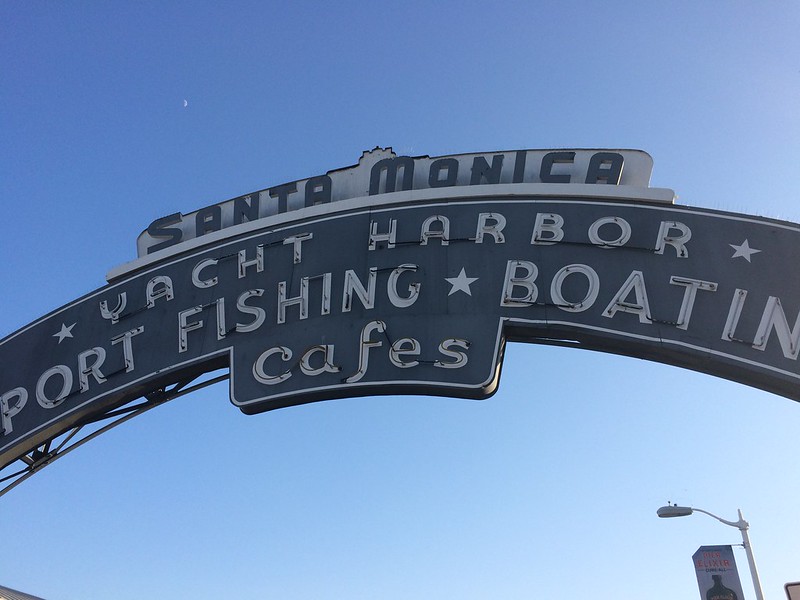 That afternoon we headed west towards the Pacific Ocean. Before long we were kicking sand between our toes on the beach in Santa Monica and chowing down on corn dogs. I’m a diehard beach girl and part-time mermaid, so I was extremely excited to finally visit a Southern California beach. What struck me was just how frenetic the beach and boardwalk were – far busier than I expected – and I surprised myself by wanting to get back to Hollywood because, to me, Hollywood didn’t “feel as busy at Santa Monica.” Crazy, I know. 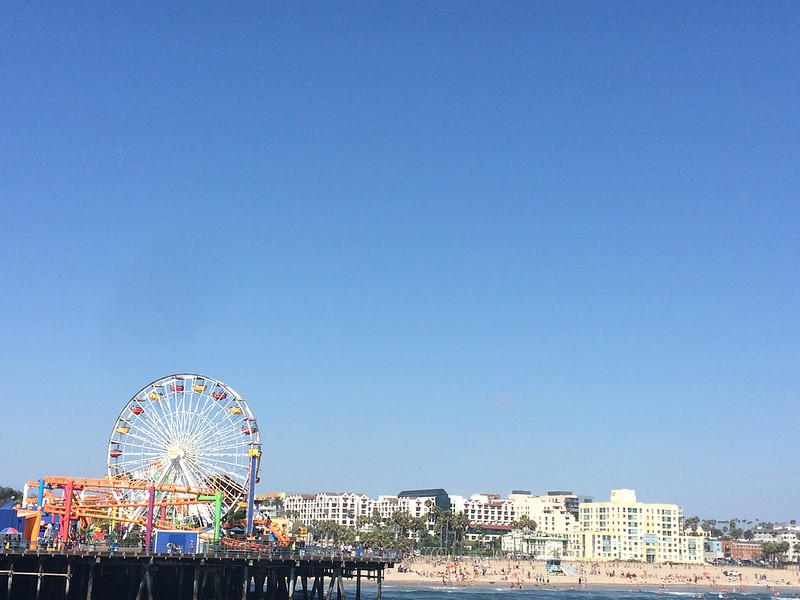 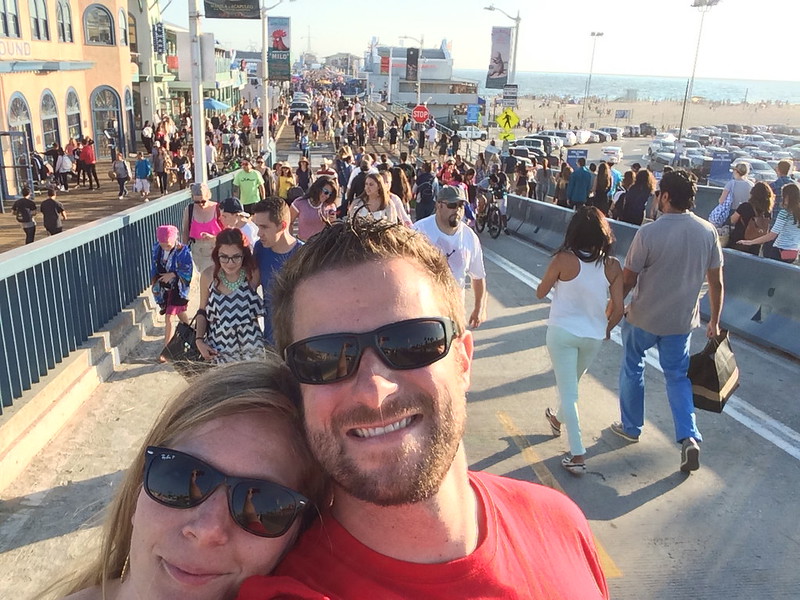 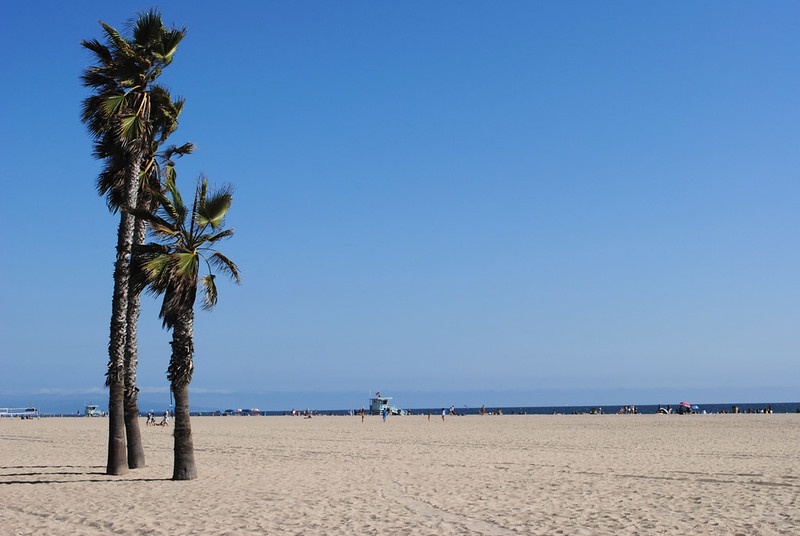 It’s hard to avoid the tourist traps in a place like Los Angeles, so instead of resisting, we often went with the flow. On our last day we walked to the Red Line subway station and made our way to Universal Studios. I was so excited to finally come face-to-teeth with Jaws, explore Jurassic Park, and get animated on The Simpsons Ride. 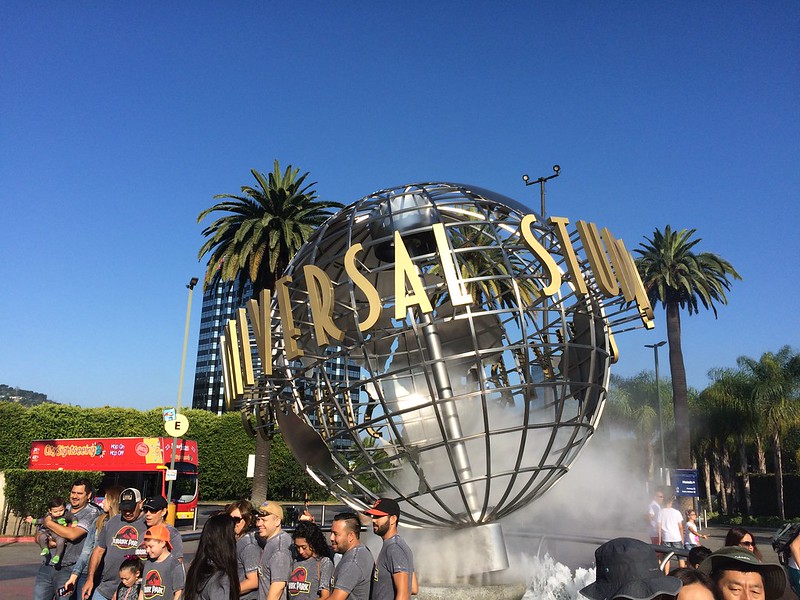 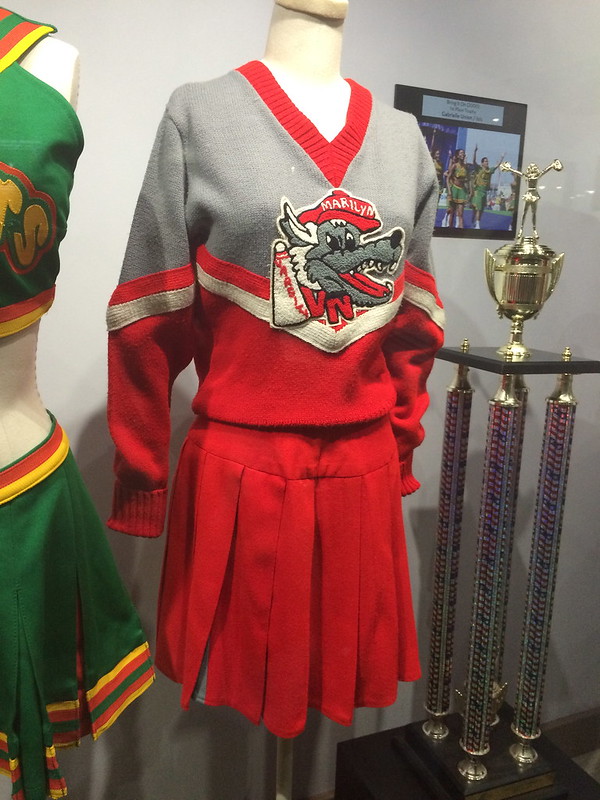 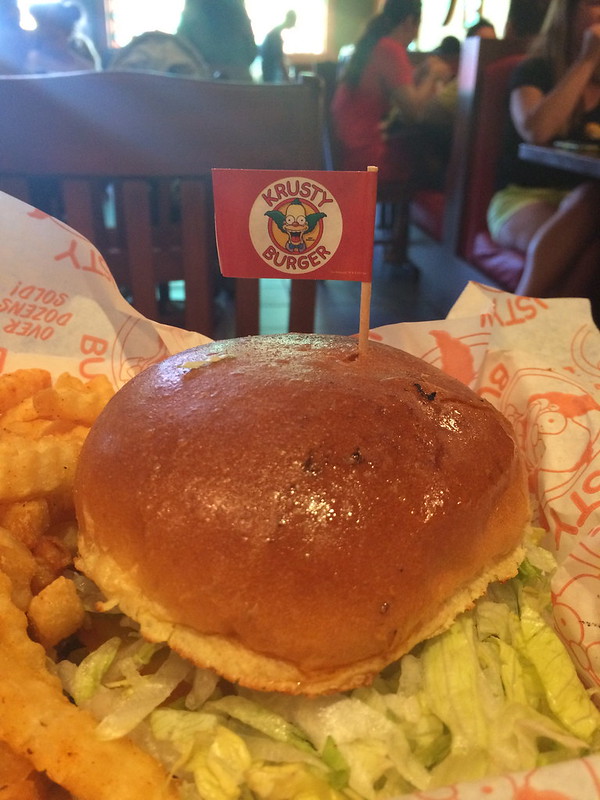 Sadly, Universal Studios was the one place on our entire six-week vacation that didn’t live up to its hype: I could count the number of rides on one hand, the cost was shockingly prohibitive, and Jaws didn’t look at all real (yes, I expected him to). Two Krusty burgers with fries and two Duff beers at Moe’s Taven set us back a whopping USD$55 – and that was on top of what we paid to enter the park. 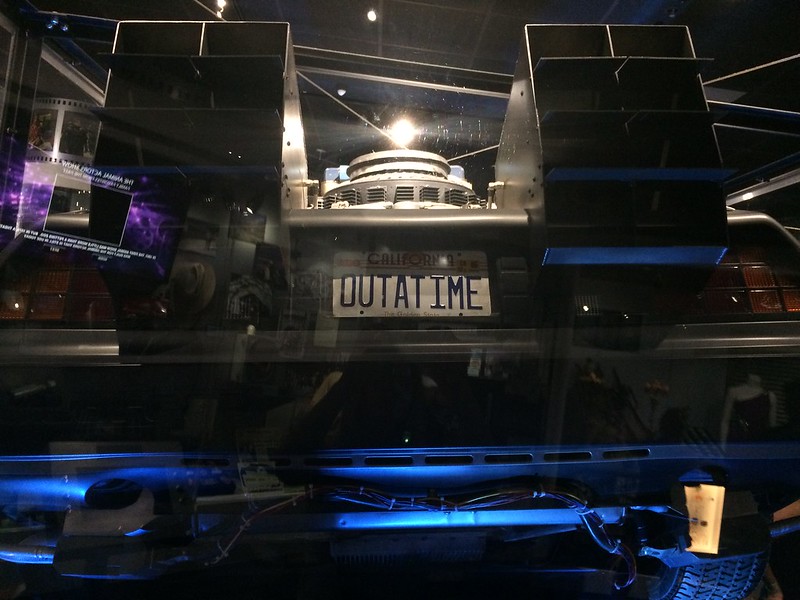 J and I were both pretty excited to get out of there, but instead of returning home, we stopped at the Ghirardelli Soda Foundation & Chocolate Shop and dug into a decadent cookie sundae. Luckily, I finally got to hang out with Mickey Mouse! We started our L.A. visit by hanging with Tony and finished it that night by having dinner with him at Home – an eclectic and quaint eatery with the kind of healthy cuisine you’d expect in Los Angeles. 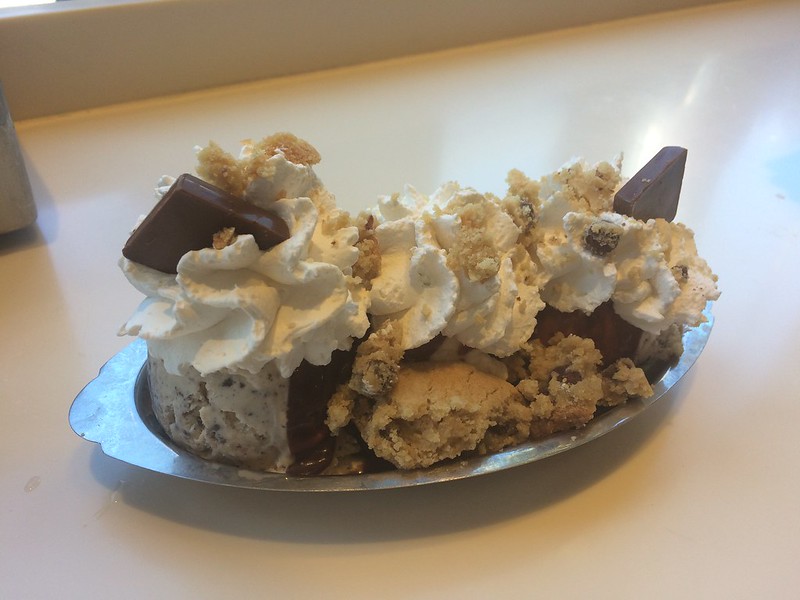 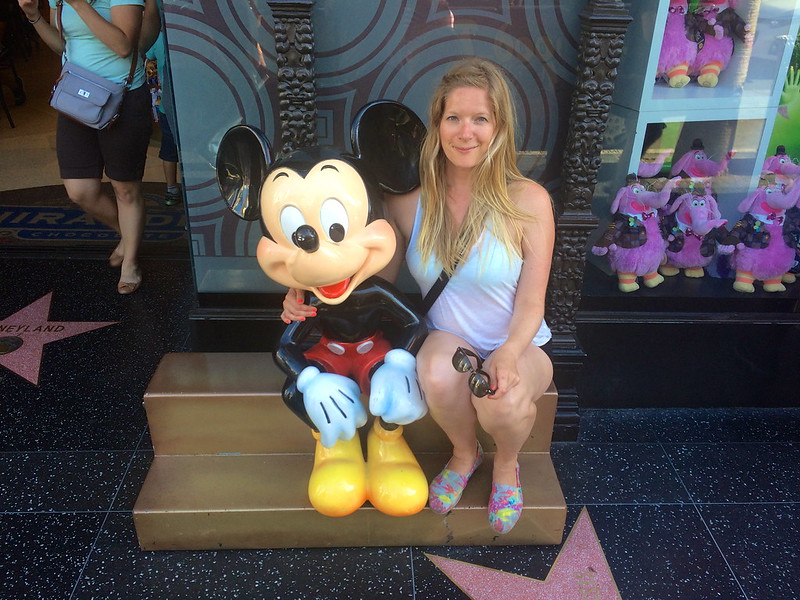 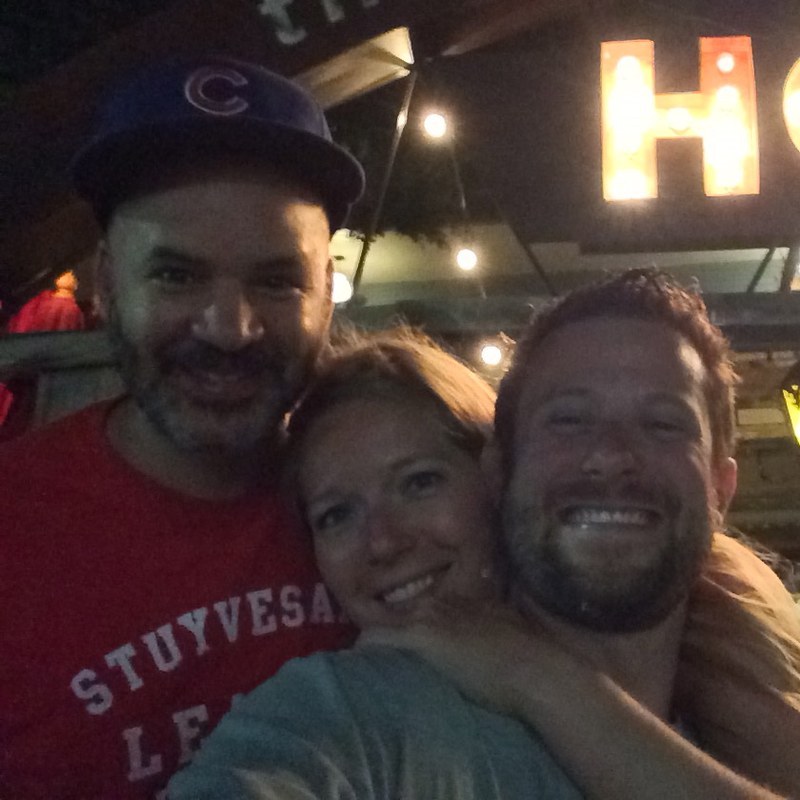 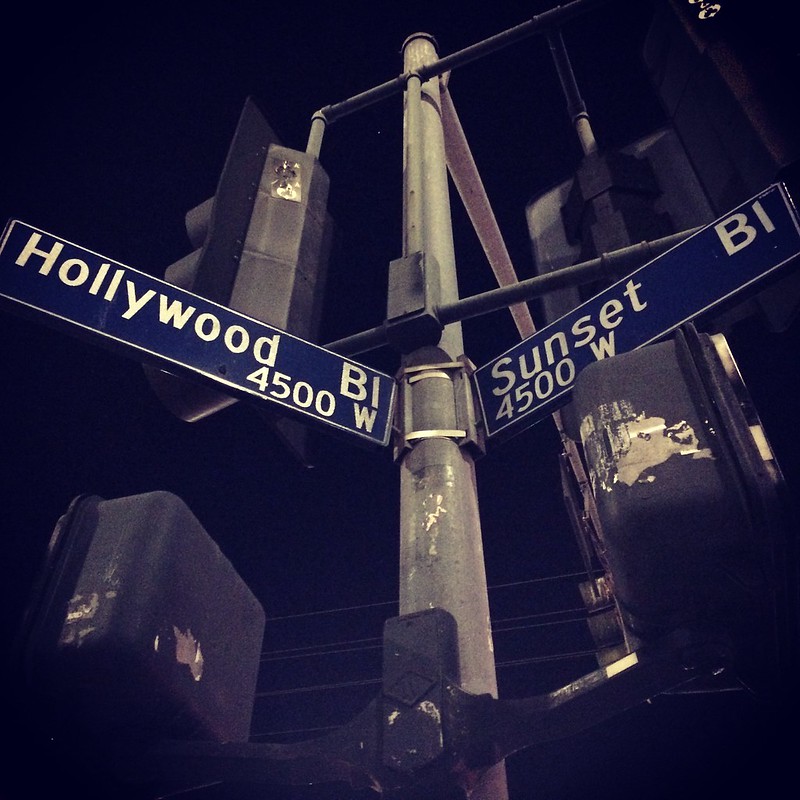 As quickly as traffic moves on L.A. freeways, our stay in the city was over just as fast. For every California dream I ever had, Los Angeles rose to the occasion and showed me all she had. And for the record, the freeway traffic isn’t that scary. I handled it like a pro. 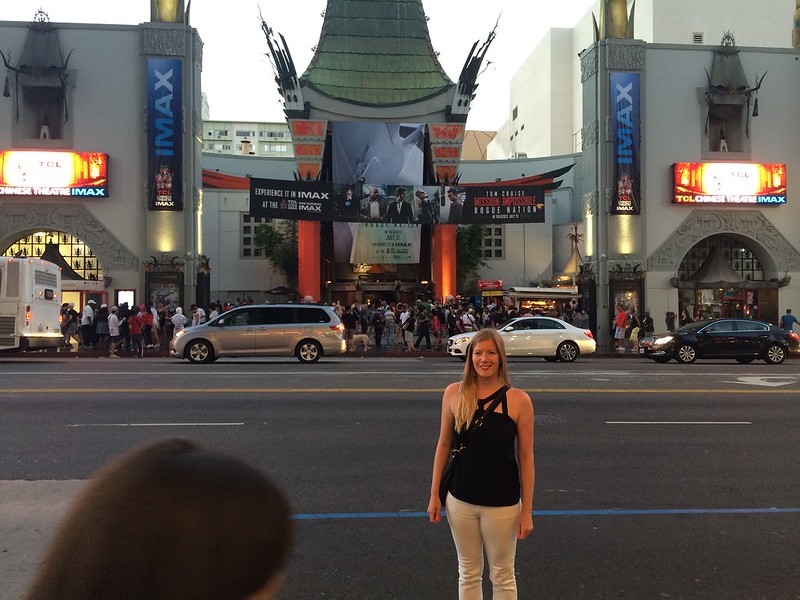 2 Comments on “Four Days In LA”