While Mount Washington Alpine Resort is known for being the Island’s winter playground, it once shared this crown with another resort in the Comox Valley. Forbidden Plateau has been closed for well over a decade, but was once a mountain packed with ski enthusiasts, peaking in the 1970s. My oldest memories of the place involve many, many yellow, brown and navy one-piece ski suits. 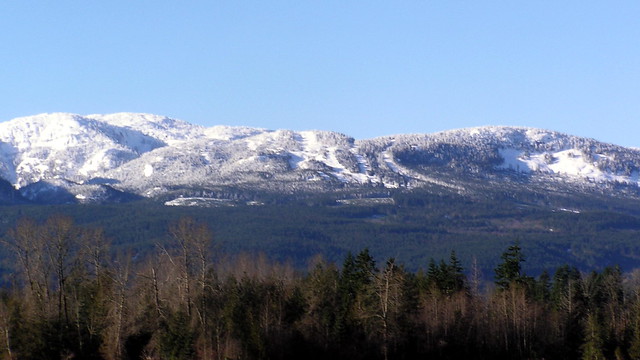 Dutifully keeping watch over the Comox Valley, it’s easy to spot the now-empty slopes about 20 minutes west of downtown Courtenay (the pink-coloured area in the middle of the map is Forbidden Plateau’s approximate location). Often well below the snow line, Forbidden Plateau no longer generates enough snow to operate as a resort, but that doesn’t stop enthusiasts from holding snowboard jump jam events throughout the winter when the pack is good.

Long before Mount Washington rolled out their stellar white carpet, the Valley’s earliest settlers established at Forbidden Plateau and built homesteads based on agricultural opportunities. The first lodge at the mountain, seen below in the 1930s, was likely destroyed by the largest earthquake in Canadian history. On June 23, 1946, the shaker ripped through the area, measuring in at 7.2 on the Richter Scale.

What is perhaps most fascinating about the area is its rich history and, in particular, how the mountain supposedly gained its name. Though the legend varies based on who you ask, it’s said that the K’omoks First Nation band brought their women and children to the mountain for safe-keeping, anticipating a battle with a band from the Alberni Valley.

When the battle was all said and done, Red Lichen growing in the early Spring from under the snow was supposedly mistaken for blood, leading the K’omoks band to assume that the women and children had been attacked and killed. It’s believed they instead died of starvation and freezing temperatures when no one had come to retrieve them.

Today the area, as part of Strathcona Provincial Park, welcomes back-country skiers, hikers, camping fanatics and nature lovers. While the remnants of a recreation era gone by are at every turn – including the former ski rental hut below – there’s still much to see and do.

Those who prefer something more scenic than grueling may be interested in hiking past a number of lakes and through flowered sub-alpine meadows to the peak of Mount Beecher. The hike can be done at a leisurely pace over the course of a morning, allowing you to dine on lunch with spectacular views of the Comox Glacier and the entire Valley.

As with any of our Province’s parks, please use caution and care while venturing out. Wolves, cougars and black bears are not uncommon in the Forbidden Plateau area, but staying respectful and keeping a safe distance should ensure everyone’s safety. Please take your garbage with you, employing the “no trace” rule.

Those wishing to visit Forbidden Plateau can do so by using Forbidden Plateau Road from Courtenay to the old lodge (which was torched in an arson incident in recent years) – this is the easiest way to access the Mount Beecher trailhead. Visitors can also follow Highway 19 and turn onto the Strathcona Parkway, driving for 20 kilometres. Turn left onto the Nordic Lodge road for 1.5 km to the Paradise Meadows parking lot. For more information on the area, please visit the BC Parks Website.

If your Vancouver Island-based business or resort would like to be featured in Island Profile, please send me an e-mail with the details and let’s talk!

← THE GROUSE GRIND LAZY PICTURE POST
YOU KNOW IT, I KNOW IT →